In 1996 the Mudgee Historical Society Inc purchased a redundant church building in Mudgee South and re-located it to the Mudgee Museum site for use for display and storage.

The church had originally been built as the Catholic church at Dungeree, a village  to the south-east of Mudgee and to the north-east of the village of Lue. The church was built on a dedicated 2 acre site on the eastern side of the village of Dungeree, traces of which have all but vanished; the site, which also included areas for a catholic school and presbytery, was located between the Rylstone-Mudgee road and the Mudgee-Wallerawang railway line, and slightly south-east of the Battens Road intersection.

Prior to the construction of a church at Dungeree, Catholic parishioners went to either Mudgee or Rylstone. Regular masses were apparently started circa 1896 in the Ryan family home in Dungeree which had formerly been a hotel. On 7th May 1905 a meeting was held to investigate building a church, while a concert and ball were held on 21st July 1905 in the Lue Estate woolshed to raise funds.

Tenders were called and a church was erected, with a Mr Callaghan being the successful tenderer. The structure was of galvanised iron and cost £110. Father Lawler of Sofala celebrated the first mass on 27th January 1906. The first altar in the church was a long wooden bench which had been used by the carpenters in the erection of the building, and which was draped with sheets. Mr J. Batten had lined the walls and ceilings of the church by 15th April 1911 and it was consecrated by Bishop Dunne on 24th February 1912. Mr Batten apparently also made the pews for the church.

The Dungeree/Lue church was constantly changed between Mudgee, Gulgong and Sofala parishes, and the Ryan family regularly hosted the visiting priest overnight. The first marriage in the church was that of Ernest Carter and Beatrice Maloney; interestingly, the first marriage celebrated in the replacement 1934 church at Lue was of their son George Carter and Wavney Batten.

In 1934 a new church, in brick, was built in the village of Lue, thus making the Dungeree church redundant. That church has since been closed. 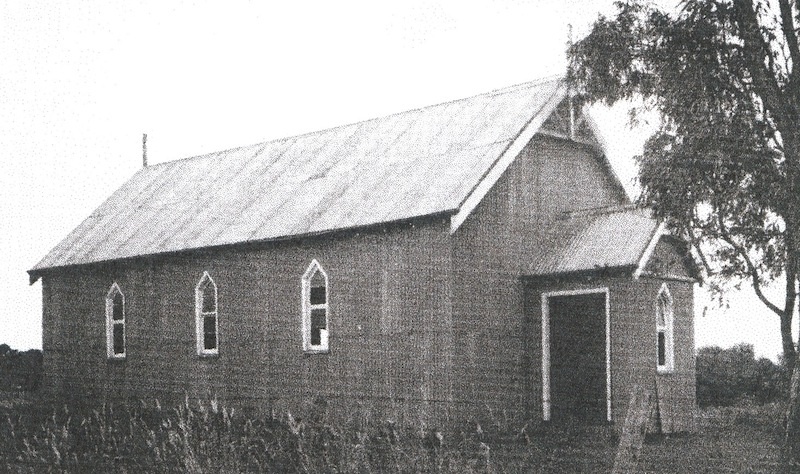 The Dungeree church was subsequently dismantled and transported to Mudgee South, formerly Redbank, where it was re-erected on the north-western corner of Spring Road and Robertson Road. The church came to be called St Martin’s, and the first mass was celebrated on Sunday 5th July 1936. Services were held intermittently at Mudgee South. In 1973 the building, once again redundant, was sold to a Mr Chapman who intended to relocate it to a kaolin mine near Home Rule to be used as a shed. This did not eventuate and it was subsequently sold for $400 to the Mudgee Full Gospel Fellowship which then leased the land on which the church stood from the Catholic church at a peppercorn rental. The Fellowship later affiliated with the Assemblies of God and the church was used by the combined congregation. In 1996 the Mudgee Assembly of God church purchased larger premises and the Mudgee South church was once again redundant.

In 1996, the Mudgee Historical Society was desperately short of display space, and wished to more appropriately display numerous items including a vast collection of costumed dolls which had been donated to the Society by Mudgee resident Mrs Eileen Steadson. The cost of building a new structure was prohibitive, so the Society investigated the purchase of the now redundant Mudgee South Church. The Society approached Mudgee Shire Council in April 1996 to assist with the cost of purchasing the church, but that appeal was not successful.

Ultimately the Society found the funds and the building was purchased at a ‘reasonable price’ from the Assembly of God church. In mid-October 1996 the church was transported from Mudgee South to the rear of the museum site by the team of Harry Potts, Harley Trotman, Don Potts and Garry McEwan. The peak of the roof had to be removed prior to transportation to allow for passage under power lines during the short journey.